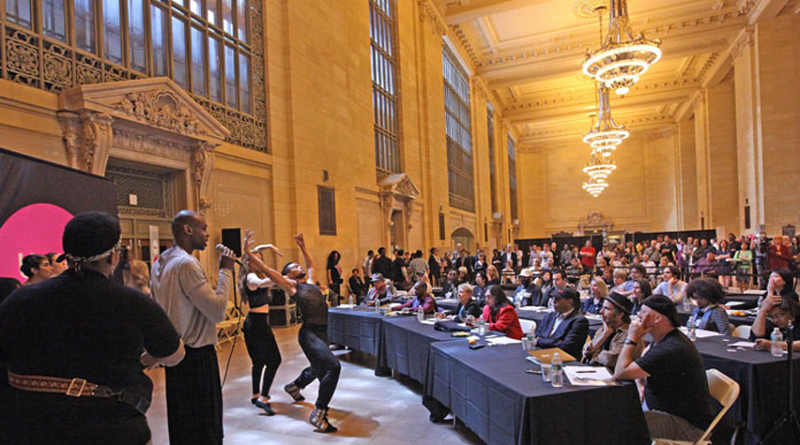 Subway Performers in the NYC Subway

Subway performers can make good money and can become famous so it is expected that the Subway performers auditions are very popular. Auditions applications are now available for the MTA Music Program and performers will need to audition in front of members of the public.

Download the Call for Performers Application and submission guidelines.

Submissions must be completed by midnight on Wednesday, March 21, 2018.

Every Spring, Music Under New York (MTA MUSIC) presents a day of Auditions in Grand Central Terminal to review and add new performers to the MTA MUSIC roster.

All MTA MUSIC Auditions applications must be submitted online, between January and the March deadline. Musicians are encouraged to apply for the Auditions. Packages will be reviewed and approximately 65 eligible performers will be contacted and invited to perform at the Auditions. All performances must be pre-scheduled. The Auditions are held live, one-day only and are open to public. A panel of professionals, consisting of representatives from the music industry, cultural institutions, MTA station operations, fellow musicians and others will judge each of the five minute performances during the Auditions based on the criteria of quality, variety, and appropriateness for the mass transit environment.

Facts About the Program

MTA MUSIC, is one of Metropolitan Transportation Authority (MTA) Arts & Design’s visual and performing arts programs, whose purpose is to enhance the transit experience for customers. Initiated as a pilot program in 1985, MUSIC became official in January 1987 garnering great enthusiasm from the commuting public.

How the Program Works

Every year, the annual Auditions are held in Grand Central Terminal to review and add new performers to the MUSIC roster. In an effort to appeal to all, MTA MUSIC seeks musicians who reflect the culture and diversity of the people of New York City. All performers are welcome to apply for the Auditions. The MTA MUSIC on-line Auditions application is available at the beginning of the year. Eligible performers are contacted and invited to perform at the Auditions, which are held live, one-day only, and open to public. A panel of professionals, consisting of representatives from the music industry, cultural institutions, MTA station operations, fellow musicians and others, judge each of the five minute performances based on the criteria of quality, variety, and appropriateness for the mass transit environment.

After the Auditions, the selected performers attend an orientation meeting to receive information explaining the procedures of the program and the regulations of the transit system, especially relating to passenger safety and comfort. As a member of MTA MUSIC, performers receive personalized MUSIC banners to display during scheduled MTA MUSIC performance at the 30 designated MTA MUSIC sites. MTA MUSIC sites are busy, highly visible locations in the subway and commuter rail stations including Long Island Rail Road Penn Station and Metro-North Grand Central Terminal.

Throughout the year for the public, MTA MUSIC presents special events in the transit system with such themes as Blues Festival, Divas Underground, Summer Solstice, Jazz Festival, etc.

For Additional Information About The Program: