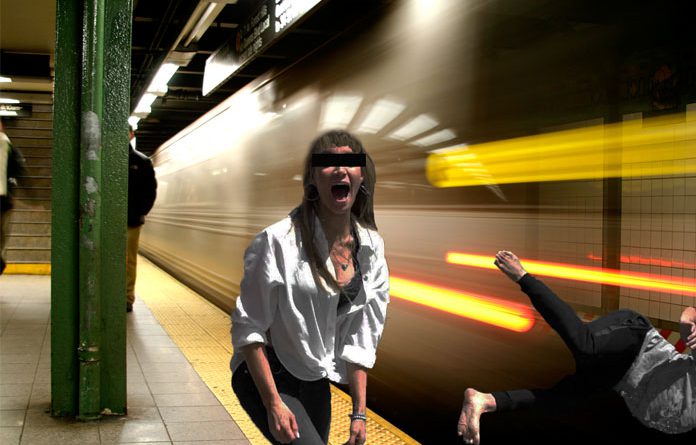 The recent subway pushing incident on a New York City Subway platform at Union Square has raised concern for both New Yorkers and tourists who use the subway to get around the city. There have been over nine incidents since 1995 where an individual was pushed on to the tracks. All but two of the incidents were fatal, so getting pushed in front of a Subway train in NYC most often ends with loss of life.

Reuben Harris, a disturbed 42-year-old, pushed Soon Sin, 63, on to the tracks at the 34th and Avenue of the Americas subway station at 9:38 AM on Jan. 4, 1995. Harris pushed Mrs. Sin onto the tracks as the F train pulled into the station and she was crushed to death. Harris was a paranoid schizophrenic who had recently escaped from Manhattan Psychiatric Center. It was a random attack with no motive. Due to his mental illness he was not found criminally responsible.

Jaheem Grayton, 15, of Brooklyn, pushed Naeemah Lee, 20, from a moving subway car on the M train in Bushwick shortly after midnight on Feb. 18, 1996. Grayton had recently been released from a psychiatric facility, but had stopped taking his medications. Grayton was trying to steal Ms. Naeemah’s gold earrings when the two got into a physical altercation between two train cars. Grayton pushed Ms. Naeemah and she fell to her death. Grayton was tried as a minor and accepted a plea deal.

Andrew Goldstein, 29, of Queens, pushed Kendra Webdale, 32, on to the tracks at the 23rd and Broadway subway station at 5:15 PM on Jan. 3, 1999. Ms. Webdale was crushed to death by the N train. Goldstein, a diagnosed schizophrenic, was experiencing a psychotic episode at the time. He asked Ms. Webdale for the time and then pushed her in front of the train. He had attacked 13 other strangers in the two years prior. Goldstein pled guilty and was sentenced to 23 years in prison.

Julio Perez, a disturbed 43-year-old, pushed Edgar Rivera, 37, on to the tracks at the 51st Street station at 5:40 PM on Apr. 28, 1999. Mr. Rivera was pushed in front of the #6 train. He survived, but his legs were severed above the knee. Perez suffered from paranoid schizophrenia and the attack was a random act of violence. He was found guilty of attempted murder and assault.

Naeem Davis, 34, of no fixed address, pushed Ki-Suck Han, 52, on to the tracks during an argument at the 49th Street subway station close to Times Square at 12:20 PM on Dec. 3, 2012. Mr. Han was too drunk to climb back onto the platform and was crushed and killed by a Q train that came into the station. The media received rebuke for recording the incident, but not helping the man back to safety and recording his death minutes later. Davis was found innocent on the basis of self-defense.

Erika Menendez, 31, pushed Sunando Sen, 46, on to the tracks at the 40th Street subway station at 8 PM on Dec. 27, 2012. Mr. Sen was crushed to death by the #7 train. Menendez was off her medication at the time and living on the streets. She attacked Mr. Sen, who was Hindu, because she blamed all Muslims and Hindus for the 9/11 attack. Menendez pled guilty to first-degree manslaughter and was sentenced to 24 years in prison.

Kevin Darden, 34, of the Bronx, pushed Wai Kuen Kwok, 61, on to the tracks at the 167th Street station just before 8:45 AM on Nov. 16, 2014. Mr. Kwok was crushed by the D train as his wife looked on helplessly. Darden did not say anything to the couple before shoving Mr. Kwok in front of the train. The assailant had pushed another man on the subway platform just 10 days before, but the victim remained on the platform and survived. Darden had been arrested at least 30 times previously. He pled guilty to first-degree manslaughter and was sentenced to 18 years in prison.

Melanie Liverpool-Turner, a disturbed 30-year-old Queens woman, pushed Connie Watton to her death into the path of an oncoming No. 1 train on Nov. 7, 2016 at The Times Square-42nd Street station at 1:20 p.m in the afternoon. Liverpool-Turner has battled schizophrenia for most of her life and claimed she was innocent. She was found unfit to stand trial.

Marjorie Chambers, 57, pushed Stephen Ware, 27, onto the Brooklyn-bound Q train tracks. at Union Square on Mar. 29, 2018. Ware survived the unprovoked attack and Chambers was immediately arrested. It has been reported that Chambers was suffering from mental problems and police state that she has been arrested twice before, criminal trespass in 2017 and assault in 1995. Chambers has been indicted for attempted murder.