Listed below are some general safety tips for the New York Subway that will protect passengers. Some basic safety tips that apply to all situations are: 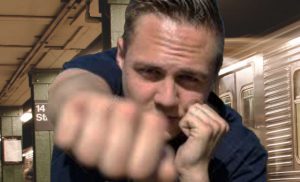 Crime data suggests that passengers are more likely to meet with violence at a NYC Subway station if they are there late at night or in the early hours of the morning, as violence is often precipitated by alcohol. Certain neighborhoods in NYC are also more prone to violent attacks and that violence can often spill into the Subway station. Having said that, some of the the worst random violent attacks on the Subway have actually happened during rush hour at busy stations, so these kinds of random violent attacks may be hard to avoid by using some generic safety tips, but passengers still need to keep their wits about them at all times when on the New York Subway System.

Safety tips to protect yourself from being a victim of Subway violence:

The New York City Subway station being the largest rapid transit in the world may also be one of the most “dangerous” in terms of theft and robbery. NYC Subway stations are often filled with oblivious passengers who are loaded with valuables in their bags and wallets are more likely to be targeted. Pick pocketing, purse snatching and violent robberies are very common especially where thousands of local commuters and unsuspecting tourists from all over the world gather, sticking out like ATM machines. Pick pocketing mostly happens on busier stations where there is a crowd, while robberies are more common late at night where there are less passengers around. Be prepared before you go to the Subway station in order to minimize the chances of your personal belongings being stolen. If you are not constantly aware of your surroundings, you may become a robbery victim.

Sexual perverts are often lurking around the NYC subway system. Reports of forcible touching, public lewdness, rape and other sex crimes in NYC Subway system have gone up by 51 percent over the last three years. Few men are aware of the many occurrences, but far too many women have experienced an attack. The victims of sexual attacks on the Subway are almost always women. It is sad to say that because of their gender, women need to take additional precautions to protect themselves from the vicious sexual predators that roam the New York Subway. It is also important to know where and when most of these attacks occur in the NYC Subway station. Illegal touching such as groping and grinding commonly happens during the morning and afternoon commuting rush hours in a busy crowd. Rape occurs most often during the late night to early morning hours in isolated locations in the stations and on the Subway platforms. Indecent exposure is far more random and can take one of two forms – blatant or subtle, both of which are equally random throughout the Subway system, but blatant exposure is more common in the stations and the subtle variety is more common on the trains themselves. Illegal groping and touching is almost always on a packed train car.

Safety tips to protect yourself from sex attacks on the Subway