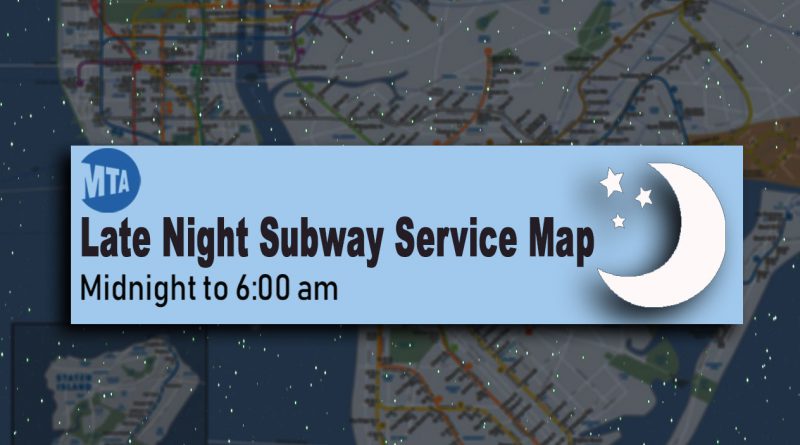 This is the official updated version of the NYC late night subway service map released by the MTA. If you are planning on traveling on the NYC subway at night, between midnight to 6 a.m., make sure to print out the late night subway service map or download the map using your phone or tablet, as Subway trains and routes run differently.
This map may take up to 5 seconds to load. Please refresh the page if it fails to load.

The NYC subway service runs 24 hours a day, but it does not mean all the lines will operate the same at night as they do during the day.

Oblivious subway riders may find themselves wandering around the Subway stations late at night because they may realize that the scheduled Subway train services may not follow the same routes and schedules as were indicated on the official daytime maps that can be found at the stations. Even the most experienced NYC subway passengers find themselves puzzled with the night system line changes, station updates and route modifications that the MTA implements during the witching hours.

Fortunately, the MTA has released a late night subway service map for those riding the Subway between midnight and 6 a.m., showing the times that the subway lines stop running. The NYC late night subway service map is now available for all subway riders, providing them the information they need for riding the subway late at night and keeping themselves safe.

Subway riders should be aware that there is a greater risk of Subway crime being perpetrated during the night hours as the late night subway service kicks in and alcohol and isolated subway platforms often play a part as much as the location of the station, with a higher risk of trouble in bad neighborhoods. Ultra-violent physical attacks happen more randomly in the New York Subway system, but robbery and theft are more common during these hours.

May 9, 2018 dnsdr Comments Off on Pay Per Ride MetroCard Compared with Unlimited MetroCard
metrocard